applicable beyond the Internet itself. Software developers could use this model to expose

interface throughout the specific environment (connectivity/reachability) in which the 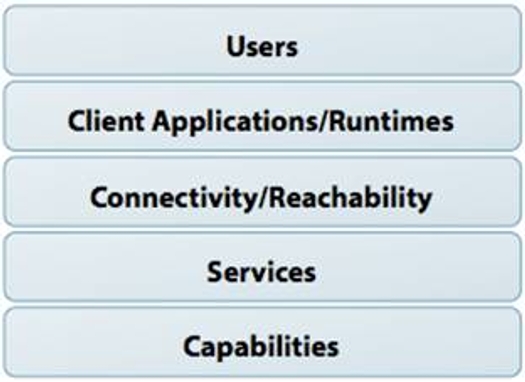 Web 2.0 is a platform used to span connected devices via services, yet it is also much

more. As more and more types of devices are connected to the Internet, the services have to

be more carefully thought out in terms of their architecture, implementation, and

descriptions. The client tier, expressed in client-server models, has been split in this

model to emphasize the two distinct aspects of the client in the model:

• the applications and runtimes, and

• the users that are the ultimate targets of most interaction

Because Web 2.0 is largely about humans as co-collaborators in the success of a process,

the model must reflect their importance and inclusion.

What has already died

The old days of client-server technology have not yet died completely, however no new

business models are likely to be based on such a simple model. Today’s Web recognizes that

users are less loyal and less patient than they were in the 1994-2000 era. When designers

and deployers of web applications allow only part of an engagement to occur on the Web,

they risk losing the majority of the users.

So what specifically has died in the last five years?

something about the users. Most new interactions use the model above, in which users

(often humans but also other applications) interact with some capability via the Web.

2. Not knowing much about your users:

The first version of the Internet was based on idempotent, largely anonymous user

interactions as noted above. The new reality is that web application users demand a more

of the new model include Google’s customizable homepage and Facebook.

Boring graphical and utilitarian user interfaces are dead. Many companies have expressed

information to users in a manner they can comprehend. Richer interactive applications are

the key to this demand. These new applications have moved beyond straight HTML to include

on the scrap heap for 2008. Users want more control over their interactions. For example,

Twitter, mostly known for its SMS capabilities, is better described as a device-agnostic

messaging system. Users can choose from a range of consumption and sharing methods,

5. Platforms not built in alignment with SOA:

Infrastructures that depend on tight binding and non-repurposable capabilities risk

becoming the next victim of change. Service Oriented Architecture, or

SOA, is an important facet of most new web applications including those that use patterns

such as Software as a Service (SaaS) and Mash-ups among others. Service Oriented

Architecture, in this context, is an architectural paradigm for matching needs and

capabilities amongst disparate domains of ownership. SaaS is software distributed as a

functionality, as opposed to software that has to be installed on every machine.

Users want the ability to collaborate and contribute. Applications that are broadcast-only

and lack at least minimal user interactions (for example via comments, tagging, or mashing

up content) are destined for the scrap heap too.

The time for applications burdened with these problems has already passed. Now let’s look

at some things going on today that will die in the next five years.